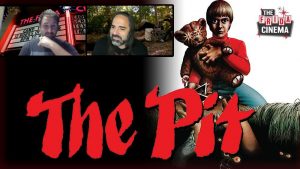 Our Streaming Cinema roster continues to expand with some fantastic titles offering a variety genres and styles — and every once in a while, a film gets in there that assaults the senses, melts the brain, and leaves some audience members asking themselves, “…WTF did I just watch!?”

In celebration of some of these more…adventurous works of cinema, our programmer Trevor Dillon announces a video series called WTF Wednesdays!  His mission?  To boldly hit the Play button on some of cinema’s twisted works, and discuss them with special guests!  Says Trevor, “I’ll be focusing on films that are either currently part of our Streaming Cinema roster, or programmed to open in the weeks ahead, but I’ll also be mixing in films that folks can currently watch on other streaming platforms.  And I’ll happily take suggestions!”

To launch his series, Trevor enlisted one of The Frida’s favorite Special Guest Stars, Horrible Imaginings Film Festival founder Miguel Rodriguez, to check out Kino Lorber’s new 2K Restoration of 1981 Canadian horror film The Pit — the story of a demented boy, his demonic teddy bear, and the man-eating troglodytes that dwell at the bottom of…THE PIT!  The Pit is currently streaming as part of our Streaming Cinema roster for just $4.99, now through Thursday, December 24th — click here to rent it today!

After you’ve seen it, check out WTF Wednesdays Episode 1: THE PIT w/ Miguel Rodriguez below!