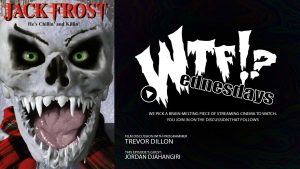 Rent Jack Frost on our streaming cinema channel, then tune in this Wednesday for the next edition of WTF Wednesdays, our new series hosted by Frida Cinema programmer Trevor Dillon which finds him boldly exploring some of cinema’s twisted works, and discussing them with special guests!  For our third installment, Trevor has enlisted the co-hosting duties of our very own Marketing & Graphics Director Jordan Djahangiri!

Jack Frost is currently streaming as part of our Streaming Cinema roster for just $6.50, now through Thursday, December 31st — click here to rent it before the show!

LOVE this theater..OMG. I’ve been here several times now for different events. I’ve attended 2 of the 3 Scott Pilgrim events thrown by Cinemattack. I was even the lucky winner of the Scott Pilgrim album on vinyl. I don’t have a record player..but may as well be a trophy for me because I never win anything! lol. I also attended “The Last Unicorn” event with Peter S Beagle- the author speaking and answering a Q and A afterwards. This was so awesome. I have always loved loved this movie and it was … END_OF_DOCUMENT_TOKEN_TO_BE_REPLACED