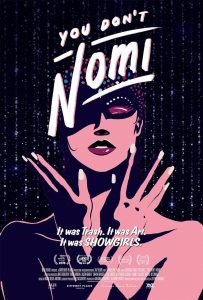 A chorus of film critics and fervent devotees explore the complicated afterlife of 1995’s biggest film flop. The film features Adam Nayman (Vice Guide to Film), April Kidwell (I, Nomi) and Peaches Christ (Milk) along with archival footage and interviews with the cast and crew of Showgirls.

A portion of every ticket purchased goes directly towards supporting Orange County’s only nonprofit Art-house theater. Tickets for You Don’t Nomi are $9.99!

“The most thoughtful deconstruction of a film imaginable.” — Film Forward

“Almost as entertaining as Showgirls itself.” — Jezebel