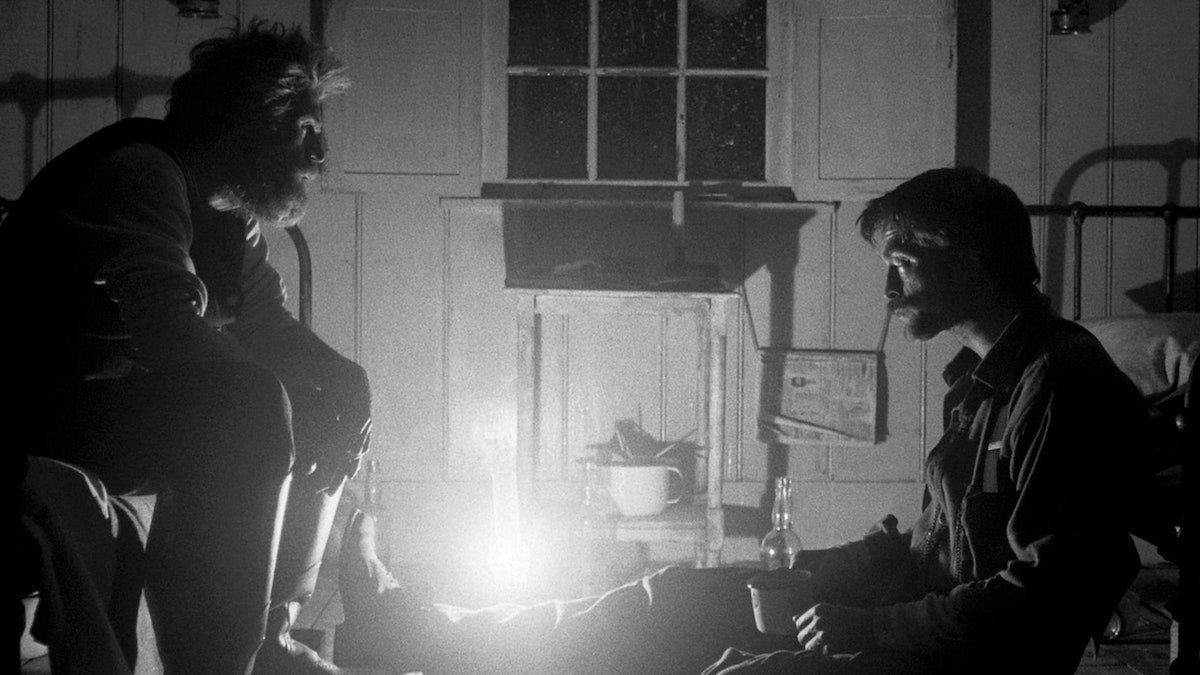 Absence of Meaning: The Lighthouse

The following is a guest article by former Frida volunteer Sam Feldstein.

All movies have to become real, on some level, in order to do their good work, and some of them can only achieve this by taking active steps to distance themselves from reality. All movies do this to some extent simply by appearing on a screen, but some of them, as with The Lighthouse, need a little more than that. Eggers’s choice to shoot on 35mm negative in an aspect ratio of 1.19:1 is the kind of cinematic idiosyncrasy usually referred to as an “artistic” decision, though its effect here is intensely pragmatic. Watching something so outwardly anachronistic forces a peculiar kind of dissonance. It untethers us from the real world, such as we experience it, and with the blast of a foghorn, tips us headlong into the film’s frigid, perpetually overcast, horrific, salt-sprayed world. And now that we’re here, we’ll buy whatever bizarro bunkum the film wants to sell. Throw in all the shrieking banshee mermaids and tentacle monsters you want, we’ll eat it up and ask for seconds. In the words of Sam Spade, we’ll take it and we’ll like it. All this to say that The Lighthouse isn’t so much a movie as it is an experience. It’s an exercise in atmosphere, and such a successful one that we forget that the thing we’re watching may very well be about nothing.

It follows that a movie in which the existence of a higher power is as explicit as anything would itself be ineffable. Such is the nature of divinity (benevolent or otherwise), embodied in this case by the mysterious and ethereal light, coveted by Howard (Robert Pattinson) and jealously guarded by Wake (Willem Dafoe). More than being deliberately designed to thwart any kind of conclusive analysis, The Lighthouse seems to revel in its own ambiguity as it hails down a practically belligerent barrage of folkloric, mythical, and biblical imagery. So many symbols and references are crammed in — though, impressively, never in a way that feels forced or contrived — that it nearly amounts to an assault on the associative imagination. At times, it almost feels like the movie is daring you to understand it — daring you, because if you can make sense of its dream-logic, you just might be crazy. In the wake of such ambiguity, the scope of possible interpretation is broadened such that any number of thematic assertions (isolation, guilt and salvation, identity, divinity, sexuality, social and professional hierarchies, etc.) may be made and subsequently justified by any number of in-text corollaries (the island setting, Howard’s confession, Howard and Wake sharing the same forename, the light itself, the sexual tension between Howard and Wake, the power dynamic between Howard and Wake, etc.). The presence of so many plausibilities belies any attempt to settle on a singular summation (not that that’s going to stop us from trying), and allows each viewer to cleave to whichever motif they connect most strongly with. This effectively broadens The Lighthouse‘s appeal and might explain how a film this enigmatic grossed eighteen million dollars at the box office.

The central enigmatic figure in the film is, naturally, the light. Insofar as it has one, parsing the light’s personality amounts to not much more than guesswork. It’s surely enrapturing, given the way Wake worships it and Howard desires it, and it exudes an aura of angelic purity. It looms over the island from the tip of its ivory tower, looking down sternly on its (mostly) willing servants. There’s a sense that it’s assessing their worth — or at least Howard’s; Wake may already have proven himself — keeping tally of their transgressions, ready to wreak havoc on them at the slightest sign of dissent. But of the strange phenomena that befall Howard (the abrasive seabird, the mermaid, the change in the wind, etc.), it is unclear which, if any, the light causes. It may be that there is some other ineffable consciousness (Neptune, perhaps?) at work here. Howard’s killing of the seabird, followed directly by a Mary Poppins-style pan to the weathervane, which does a complete one-eighty, signaling the change in the wind and the coming storm, establishes the definite if still equivocal presence of a divine (or at least supernatural) force, but whether that force is the light itself is impossible to say. Most movies, e.g. A Serious Man, in which a character in one way or another grapples with a higher power, opt to leave the existence of that higher power open to interpretation. The reason may be that once you cross that line, and firmly establish the presence of an omnipotent puppet-master, as The Lighthouse does, the answer as to whose hands are pulling the strings becomes very real: The hands, of course, belong to the director.

Robert Eggers is the latest, even if he’s not yet known for it, in a line of auteurs, most if not all male, who are famous for the demands they make of their actors. (Stanley Kubrick comes to mind as the quintessential example, and Alejandro Iñárritu earned his place in that pantheon with The Revenant.) Kubrick’s now-infamous treatment of Shelley Duvall on the set of The Shining was less self-evident, but with The Lighthouse it’s all there on the screen: Robert Pattinson struggling to shove a heavy wheelbarrow up a craggy slope as he’s pummeled with frigid seawater, Willem Dafoe choking on dirt as he’s buried alive, and so on. However honest their intentions, one can’t help but wonder if these directors get off to some subliminal extent on putting their actors through hell, and if we’re willing to do a little self-examination, we may see why. How often do we get to make real people into our playthings? To exercise over another person real and total control? The idea may be revolting, but since when has your subconscious ever given a hoot about what you find revolting? Notwithstanding the existence or absence of such impulses within ourselves, we have to acknowledge that power dynamics like this — whether malicious, benevolent, or simply innate — play out every day: between parents and children, between employers and employees, between couples (esp. in the bedroom), between dictators and entire countries, between directors and actors, between Thomas Wake and Thomas Howard. The inferred sadomasochistic trifecta formed by Dafoe, Pattinson, and Eggers is made more compelling by its alternative, which is difficult to imagine, and even harder to believe: A weary director soberly and solemnly torturing his performers to within an inch of their sanity, hating himself for it but nevertheless steadfast in his conviction that unjust though it may be, such treatment is essential to the story he’s trying to capture. 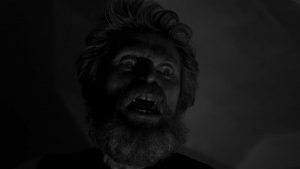 But maybe it is essential. And maybe such a director does exist, or has existed. You could argue that the effect achieved, one of such palpable tension and burgeoning insanity, could not be evoked any other way. As to the physical torment the characters endure, how else do you show someone being buried alive other than to chuck them in a hole and throw dirt on them? In such a scene the line between the movie world and the real world blurs. The hallmark cinematic illusion succumbs to the understanding that what you’re watching is anything but illusive. You’re watching real-life person Willem Dafoe chew on dirt, and the effect is supremely unsettling.

Knowing then what the actors endured to bring this movie to life, the question of meaning, as addressed earlier, becomes paramount. The question is this: In the absence of any discernible meaning, how can we be sure The Lighthouse is anything more than one man’s meticulously crafted cathartic exercise in self-loathing and existential angst carried out vicariously via two piteous, albeit willing, actors, seemingly for no other reason than to make the pedantic point that suffering is inevitable? It’s not an appealing conclusion, not only because it wouldn’t be very interesting, but because the sheer vigor behind the film, practically radiating off the screen, demands that we make more of it than that. We have to believe that what the characters and the actors endured means something more, was in some way worth it. It’s a natural impulse, and one we can extrapolate to our own lives. Most of us would prefer to believe that all our hard work, all our pain, in some way matters.

This belief embodies Thomas Howard to his core. In the confession scene, in which he “spills his beans,” Howard reveals that he is responsible for the death of Ephraim Winslow (Logan Hawkes), the foreman at his previous job. Thus we learn that he’s a man on the run from himself. He intends to remake himself anew, to wipe the slate clean by moving far away, taking on a new name and a new profession. He hopes to redeem himself through hard work and earn enough to buy his way into a new life of settled peace. But as the story progresses, it seems that everything on the island, from Wake to the sea itself, is determined to thwart his attempts at salvation. He is tested so relentlessly that we (and he) begin to wonder if he ever stood a chance at all. Wake, with his farts and self-important long-windedness, tests him. The one-eyed seabird, who rips at his pant-leg and outright attacks Howard at the cistern, tests him. Some force at large seems determined to keep the cistern itself unclean, forcing Howard to instead drink liquor, which counts as another strike against him. If the light is salvation, as Wake implies early in the movie, and salvation is to be earned, what does it mean if those attempts to earn it are continually and deliberately frustrated?

As we see in the film, a man can only withstand such a direct assault on his inclination to uprightness for so long. Sooner or later, Howard has to break. By the time he kills Wake, he understands, as revealed by his discovery of Wake’s logbook, that all his efforts were for naught. His belief that his work matters — that is, that it will be rewarded —  has been completely undermined. In the absence of that belief, or rather in the absence of the affirmation of that belief, life itself becomes pointless. And that’s where The Lighthouse leaves us. In that bleak, barren place on the rocks.

The Lighthouse screens at The Frida Cinema this Saturday only.
Saturday, Apr 16 – 10pm
Tickets 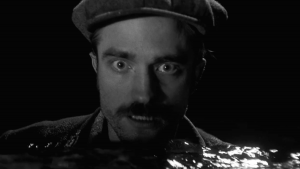