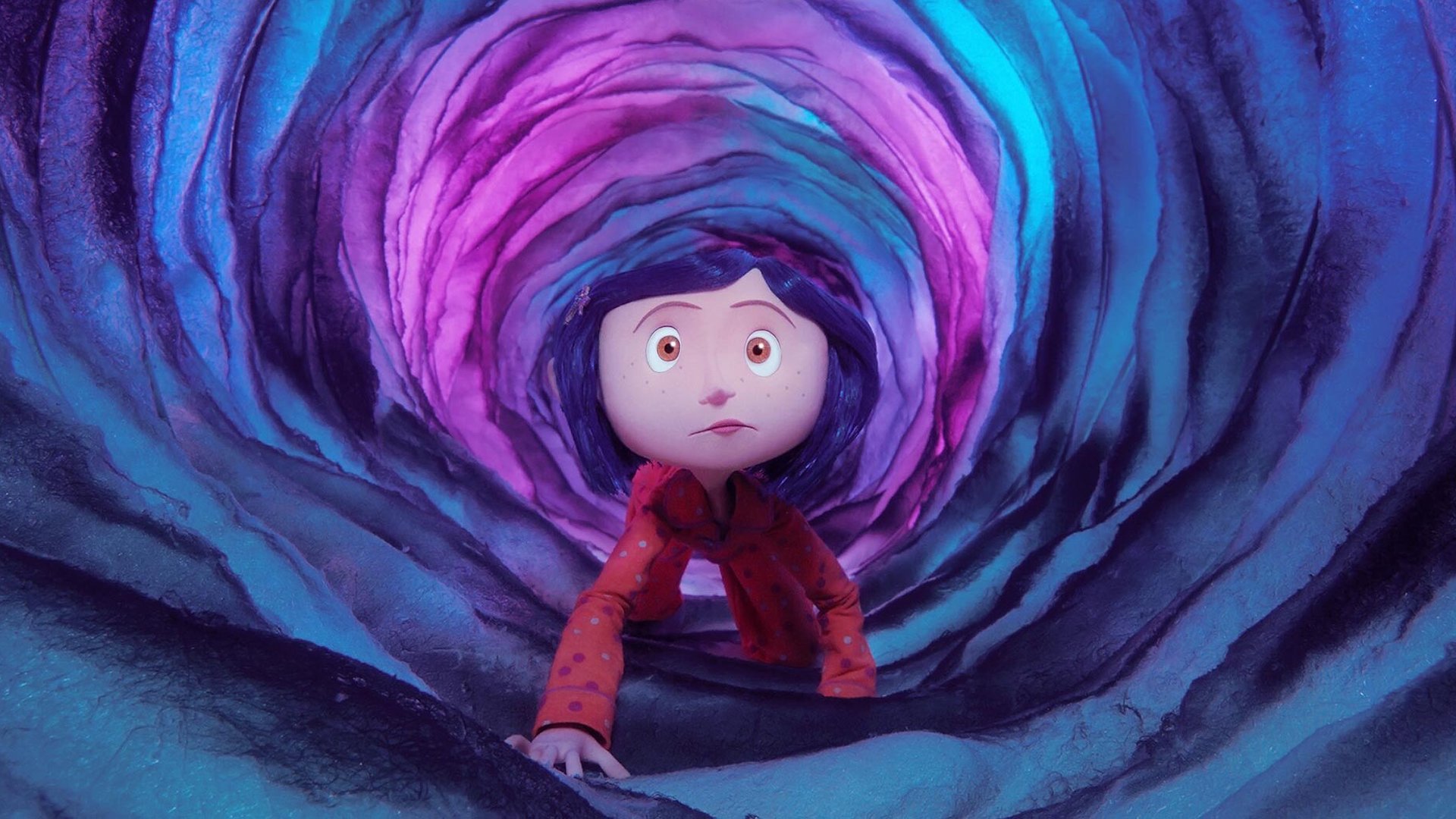 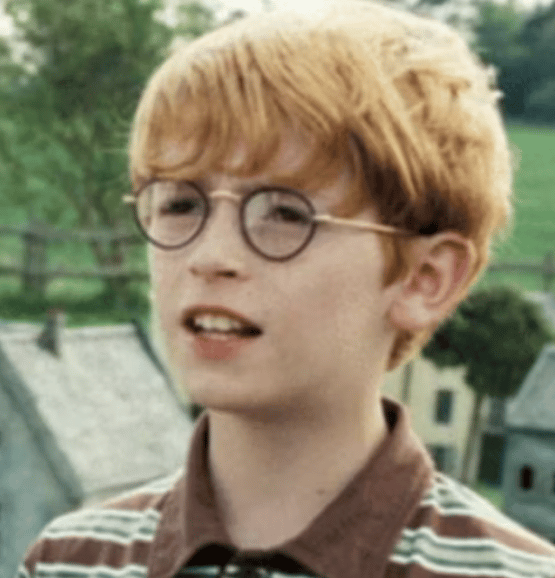 Renown for his award-winning video essay series on the films of Kenneth Anger, film blogger Aaron A. Aaronson comes to us from the rural town of Sandford, Gloucestershire, UK. Aaron enjoys hiking, element collecting, and model villages.
All Posts

The following is a guest article by Frida patron Shelby Perlis.

The story of Coraline Jones has now been chilling and fascinating audiences of all ages for twenty years — starting with Neil Gaiman’s publication in 2002, followed by Henry Selick’s 2009 stop-motion adaptation. There is something palpable to us about this young girl who is bored: who wants something to do, who marvels at the secret door she finds and the magic that it leads to, and who stumbles when she realizes the unknown isn’t what she’d hoped. This children’s story becomes one of terror by harnessing comforting images — the home, the mother, carnivals, and magic — and subverting them into frightening dangers inside the home itself, challenging audiences’ conceptions of safety even in our own world.

Importantly, where this story takes root… is with a door. To a new world, to a new mother, to magic: to the unknown. While frightening, when revisiting this story we’re reminded that doorways like Coraline’s are opportunities for exciting (if consequential) change. Coraline tells us that undertaking the unknown is an ethical and transformative endeavor, offering an explorer the chance to progress their understanding of themselves and their world. 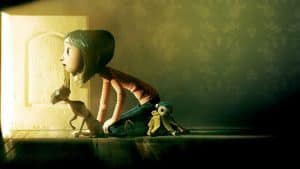 Author Ursula K. Le Guin famously frames the unknown by comparing it to a great national park: a liminal place where one goes to explore reality in a new way. However, like with trekking through a national forest without equipment or preparation, this endeavor cannot be done passively; she warns in “From Elfland to Pougkeepsie” that “A great many people want to go [to the unknown], without knowing what it is they’re really looking for, driven by vague hunger for something real”. It is this ambiguity, this lack of commitment, that endangers Coraline and her counterparts. We cannot live in doorways, they warn us. Coraline cannot live in the Other World without committing to the Other Mother’s dreaded button eyes or without giving up her soul. She cannot have new knowledge without risk. She also cannot simply stick to her boring life — be apathetic about the door — and be content. The unknown, then, asks us to make choices. This alone is a dangerous, trying, transformative task. And we see that these choices for us begin as soon as we come across our doorway. Do we go in? Do we choose the ordinary, or a potentially rewarding unknown, acknowledging the likely presence of consequences? 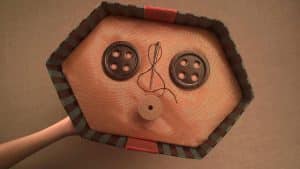 If this weren’t enough of a dilemma, our heroine (and with her, us ourselves) must then face what might be an even more frightening realization: the unknown is irrevocably tied to a question of ethics. Coraline cannot simply escape and bar the door; just as she realizes she wants to leave the Other World, she meets the ghosts of the Other Mother’s past victims. It becomes clear that her choice to enter also comes with the issue of ethics and morality. For Coraline and her younger audiences in particular, morality is often presented as a black-and-white concept: “Do as you’re told.” “Be kind to others.” “Obey your mother.” What do we do when these simple structures reveal startling consequences or dangerous prerequisites? Coraline continues to captivate us in the way that it twists “goodness” away from “objectivity” and “fun” away from “better.” Entering a door oftentimes affects others within and outside that door. Coraline’s fate becomes linked with the ghosts’ once she enters their world, as well as her eventual need to save her parents. At the foundation of her journey is this sense of responsibility. Perhaps, then, to explore new worlds is to reposition our understanding of our own agency—a complex undertaking, indeed, but an essential one for personal growth.

Breaching the unknown, though a catalyst for fear, is a productive experience which can encourage engagement with new modes of interaction: with others, with the world, and with ourselves. The story of Coraline works by transgressing categories—categories such as home, family, parenthood, morality, and fun. It can be intimately painful to shatter our preexisting understanding of these concepts, as it is for Coraline… but as a result, we are left with an opportunity for new understandings. Author and scholar Jeffrey Jerome Cohen in “Monster Theory: Seven Theses” considers the idea of monsters in storytelling as “secondary bodies through which the possibilities of other […] social customs can be explored”. Our monster here, the Other Mother, certainly challenges Coraline’s conceptions of her world. The Other Mother and even Coraline herself explore their worlds in destructive ways — they upend domestic order, refer to magic over real-world order, disregard the existing order of authority, and trample customs such as politeness, friendship, love, and family structure. 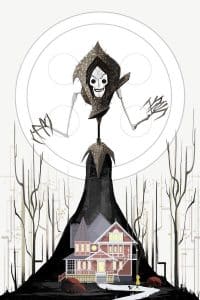 However, the Coraline we’re with by the end of her story is not the Coraline we met in the beginning. The dissatisfied, bitter girl at the start has transformed into a leader, a helper, and an agent more knowledgeable about the world she lives in. She has learned to defend and stand up for herself as well as those she cares about. By challenging what she knows, she is able to better value what she has and who she is — without losing her signature exploratory spirit. Coraline doesn’t resign herself to leaving all doorways alone after finally escaping danger. Instead, she emerges triumphant, empowered to go forward with what she has gained, and then begins over with a renewed family, community, and life she has chosen for herself. It seems there is power in entering a door, seeing it out, and then closing it behind you.

Scholar Z.D. Lalhmangaihi states that both the joy and the terror of Coraline is in her pursuit of identity; “Coraline is centrally concerned with how one negotiates one’s place in the world; how one is recognized in one’s own right”. The unknown is a vast space, but it is also vast in its capacity for progress. The immense growth of one young girl here suggests to us that there is opportunity for expansion and identification within fear itself. It is ironically the monsters that Coraline faces that help humanize her, allowing this explorer (and therefore, us as viewers and explorers ourselves) the chance to progress understanding of ourselves and our world. Though the unknown sometimes hides terrifying, painful monsters, to meet the unknown is to be human: and to choose a door is to grow.

Why do we continue to be charmed by Coraline? Why do we seek out what scares us? Perhaps it is because we know we will all have our own doorways.

Happy twenty years, Coraline — and happy transforming to us.