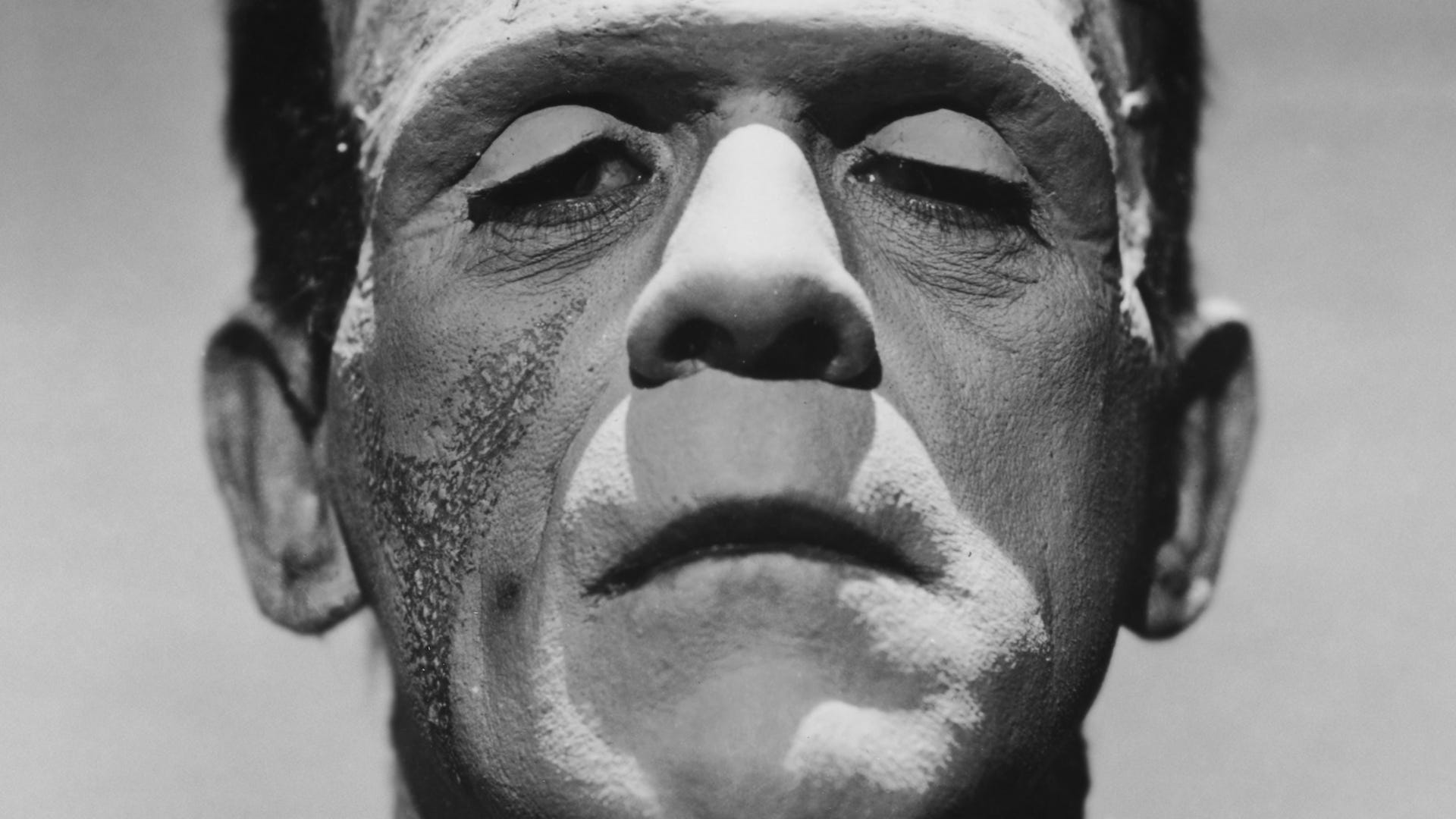 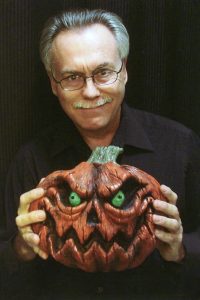 In honor of the 70th birthday of David J. Skal, filmmaker, novelist, and highly regarded classic horror authority, we celebrate this major occasion with an interview with Skal regarding Universal’s iconic horror movie Frankenstein.

Skal, who authored Hollywood Gothic and Turner Classic Movies’ Fright Favorites, also produced, wrote, directed, and hosted the special feature documentaries accompanying the classic Universal monster films on the special edition Blu-rays and DVDs. As a prominent horror historian, Skal has been featured in multiple horror documentary films and series, including Eli Roth’s History of Horror and Boris Karloff: The Man Behind the Monster.

Sharing with us the history and legacy of Frankenstein, Skal explains the fascinating journey that Frankenstein’s Monster took, from his early appearances on the stage to becoming a legendary and uniquely beloved pop culture icon.

How popular were the pre-film stage adaptions of Frankenstein?

There were many adaptations. Even Mary Shelley saw the very first one, Presumption; or the Fate of Frankenstein. She was very amused by it.

Back then, there was no such thing as stage copyright. People were free to use everything that they wanted. Frankenstein was done in many different versions over the course of the 19th century. It was later done in the 1920s, in England, by playwright Peggy Webling, who teamed up with Hamilton Deane. Deane had written and produced the first stage play of Dracula. He put Frankenstein into rotation with Dracula and took Frankenstein to London’s West End, the same way he did Dracula.

The Broadway producers of Dracula thought they would do the same thing with Frankenstein and take it to Broadway. Universal stepped in and bought the rights before Frankenstein could even be done on Broadway. Its script is still around and contains a number of things that are still in the film.

In the opening credits of Frankenstein, the credit of the Monster is left unknown. What led Universal to make that decision?

It was to raise the possibility that there was something odd appearing. “Was this even an actor?” “What was this thing?” “What were they going to see?” Audiences had never seen anything quite like this creature. So, Universal wanted to wrap it in an air of mystery. Boris Karloff was not a big star, despite acting in 80 films before Frankenstein. Legend has it, Karloff wasn’t invited to the premiere. However, Karloff was credited in the end.

Is there any truth to the story that Karloff was not contracted as the Monster until after filming for Frankenstein began?

Yes. Before shooting, Karloff had to sit for all those hours of makeup experiments for an unknown number of weeks, completely unpaid. The idea was that this was in some way an extension of the audition process.

Karloff was not signed to a contract until several days into shooting the film. I saw his original contract ledger. They began the principal shooting without the Monster contracted. I think everybody knew he was going to be hidden.

Who influenced the Monster’s makeup? Was it makeup artist Jack Pierce, director James Whale, or a combination of both men?

I think it’s a combination. There are no photos of the test makeup that Pierce did for Karloff, who, by the time Whale came along, was no longer part of the package. There are those who say that the makeup was very different from the familiar Karloff one. Edward Van Sloan, who appeared in Karloff’s screen test, described it in similar terms to the makeup of The Golem, the silent German expressionist film. This makes sense because that would have been a natural prototype.

Whale was an artist. He was a painter, a set designer, and [he] knew about the arts. He was more steeped in the arts than Pierce, especially art movements like Expressionism, Art Deco, and Modern Art. The Monster really seems to come out of that tradition, with the angular look, like the heroic figures on the sides of the Chrysler Building. But knocked to pieces and glued back together in some ungodly way. In my book The Monster Show, I compare the Monster to the bottom of the Depression, resembling a hood ornament of a wrecked economy.

It’s said that Karloff himself came up with the idea of the Monster’s heavy eyelids. He suggested they put putty on his eyes for that half-awake, sleepwalking kind of look.

There was at least one trial make-up for Karloff in which he has a much more machine-tooled forehead, with these angular ridges and metal rings set into the forehead. That somehow gave way to the scar and the clamps along the hairline. That picture ended up finding its way into some of the posters and advertisements for the film. They weren’t keeping track of it. 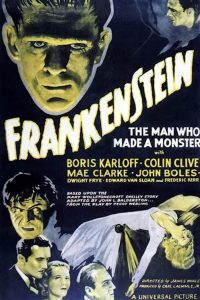 Frankenstein’s set appears to have a strong German Expressionist influence. Was that intentional?

Robert Florey, who was originally assigned as director, loved German Expressionism. So, a kernel of that probably started with Florey. After he got taken off Frankenstein, he got Murders in the Rue Morgue, with Bela Lugosi, as a kind of consolation prize from Universal. It’s even more heavily influenced by German Expressionism than Frankenstein. It uses some of the Frankenstein sets, so it’s very interesting to film watch alongside Frankenstein.

The idea of German Expressionism was that it wasn’t objective visual reality. It was a visual impression that was coming from the internal emotions and distortions of the chaos of World War I. Artists were trying to make sense of this world that had been torn apart and had to be put back together. In The Cabinet of Dr. Caligari were a lot of the craziness and zigzag sets. Those kinds of sets are in Frankenstein but not as exaggerated. You don’t see too many right angles.

The overall appearance of the Monster is very reminiscent of Cesare, the sleepwalking in The Cabinet of Dr. Caligari, the first great German Expressionist film, with a dark silhouette, a pale face, and the lank hair. The scene in which Conrad Veidt, as Cesar, goes into the girl’s bedroom should be shown on the split-screen next to the parallel scene in Frankenstein. With so much of the talent at Universal in the 1930s coming from Europe, many from Germany, German Expressionism was kind of second nature to them.

When the Monster sees sunlight for the first time and reaches for it, what was that a metaphor for?

They wanted to show that the Monster was befuddled, with this childlike sense of discovery. He didn’t know what the sun was and where he was. “What is this? What is this light? What is this [that’s] drawing me?” Then he’s just shut back into darkness.

This goes back to the original novel with the idea that man in his natural state is good, is not born good or evil but is made good or evil. That was one of the great philosophical arguments of the time that Shelley wrote the novel. We can see an echo of it here in the first movie version of Frankenstein.

How important was it to make the Monster sympathetic?

It’s the reason that Lugosi didn’t really want to do the part. The script he was shown was not the final one that Karloff did. The Monster was originally conceived as a brute and [a] killing machine. Lugosi famously said, “I’m an actor and not a scarecrow.” He really didn’t want to do that. It seems to be a mutual decision between Universal and Lugosi, who would do something else for them.

Instead of distancing the audience, it pulls the audience in if the Monster is sympathetic. You care, you lean forward, you want to help, and you identify with him. But, if he’s just a stumping, killing, robotic kind of creature, you get upset and run away. It’s a completely different kind of audience involvement. I don’t think Frankenstein would have achieved anywhere near its success without it.

Karloff always said that it was children who flocked to the Monster. They were never terrified. They always identified with the Monster and told him when he encountered them.

What is your favorite scene from the film?

Colin Clive, as Henry Frankenstein, brings his visitors unwillingly into his studio and laboratory. When they sit down, they’re seated on chairs, facing Henry, as he gets up onto a raised area, like a stage, and gives his little speech that culminates in the line, “One man crazy. Three very sane spectators.” Then the show starts, with wild electrical equipment, as the operation table rises in the air, like a piece of flying scenery. I like it because it’s Whale being a theatre director. He’s staging it as a scene in the theater.

What was the cut line and how was it restored?

I worked on the DVD for the original digital release of Frankenstein in 1999. There was a cut piece of dialogue as Henry is exalting as the monster is alive, “In the name of God! Now, I know what it feels like to be God!” It was cut out in 1931, but nobody ever bothered to try to restore it. So, I put it in the opening of my documentary, The Frankenstein Files. It just stunned people.

That was owned by a private collector, who offered it to Universal. It was a recording from one of the sound discs. In the early talkie days, the sound was on big records. This was out there, but nobody thought it was worth putting back.

After a number of people doing favors, that soundbite got to the people who did the real feature restoration for Universal, and it appeared on the first DVD release. It got people’s attention. That calculated theatrical effect worked. People perked up their ears.