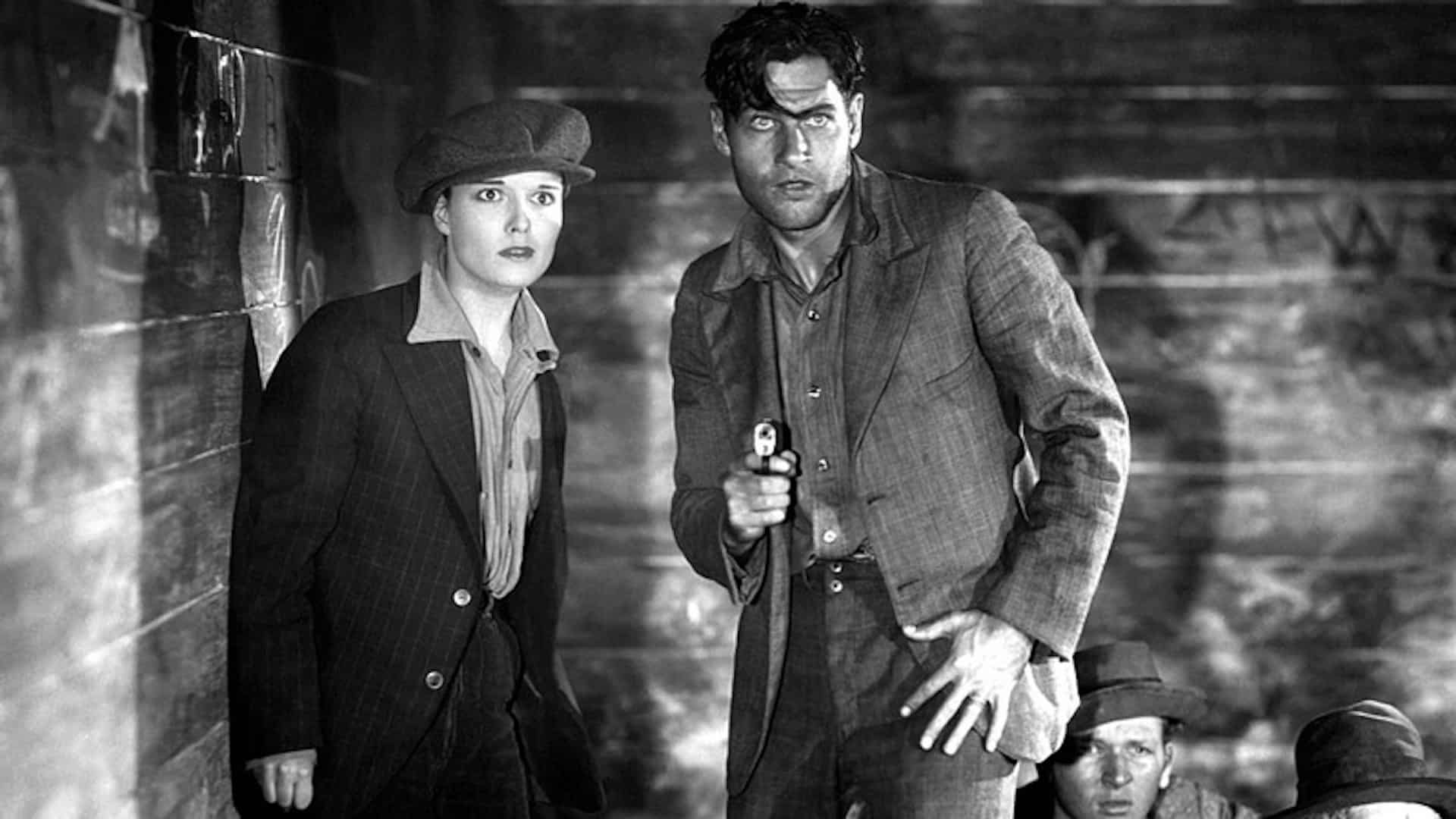 The holidays are coming up, and so is some excellent Frida programming this December! This weekend sees Noah Baumbach’s White Noise open, an apocalyptic black comedy starring Adam Driver. Then the following weekend, Rocky Horror shadowcast troupe KAOS returns with a one-time encore performance of their original Cult Soup show! And it wouldn’t be Christmastime without Twisted Christmas, a holiday horror movie double feature and spooky gift shopping opportunity presented by Dark Alley Productions. Before the season really gets under way though, we’re throwing it way back with Beggars of Life, a crime drama from the 1920s.

Directed by William Wellman, the film stars Louise Brooks as an unnamed girl who’s forced to defend herself against her belligerent step-father and ends up killing him. Wanted by the law for this act of self-defense, she disguises herself as a man and goes on the run with iternant hobo Oklahoma Red (Wallace Beery). Paramount’s first sound film as well as the first in which Beery’s voice was actually heard, that version of the movie has long been considered lost, with only the silent version available today. Nevertheless, the film is considered noteworthy for having what some critics consider to be Brooks’ finest performance as well as its early exploration of LGBT themes.

The person who programmed this movie is none other than Grant Hoskins, our December Volunteer of the Month! Another newcomer to The Frida, I only got to talk to him once (and briefly, at that) before our interview. Yet from the little time that I’ve spent with him, I can already tell he’s a lot of fun to talk to, with the word that kept coming to my mind during our interview being “gregarious”. Clearly having put a lot of thought into his choice, he discussed some of the movie’s political content as well as that of his other VOTM picks, giving some added context to all that I could appreciate. I’ll have to track them down, but for the time being I’m going to try and make it out to Beggars of Life next week!

I think I was just driving by one day and it just so happened that some artist that I knew around the same time had been talking about it, so I realized for the first time what this place actually was. I think the first time I came was the Soviet September series and I really loved it, so I just kept coming back.

I really like theaters like this and there aren’t too many anymore. When I was growing up there were several but they’re all gone now, so I am so happy that The Frida’s here now and just wanted to be part of it.

Tell us a little bit about Beggars of Life.

Well, I’m not a scholar or anything but I know I stumbled on it almost by accident one morning. It was just early in the morning and I happened to find it on TV. It hit all the right boxes for me, it had really interesting actors like Louise Brooks and a lot of political subtext that appealed to me. It starts out with a woman who has to defend herself against a man that’s exerting power over her, and then she finds another guy who’s part of the hobo movement that was going on at the time. They escape together and they all live together in this anarchic life on the rails from one place to the other.

It’s just very appealing to me in a lot of ways, mostly for the politics though.

My other choices were Pedicab Driver, which is an all-time favorite of mine, a Hong Kong movie from 1989 starring Sammo Hung. When I was a kid, this was a big movie for me, my brother, my neighborhood. We were obsessed with that movie. I haven’t seen it in maybe five or six years, but it still holds up for what I consider to be the golden age of Hong Kong filmmaking. Everybody was at their peak, it’s just a high watermark of that era. It’s funny because that movie also has a similar set of politics.

The other one I picked was Dersu Uzala, which is Akira Kurosawa’s Russian movie. I guess he was going through a time in his career where he couldn’t get funding in Japan or in the US, but Russia offered to fund one of his movies and it was this one. It’s really about relationships, particularly these two people’s friendship, and it’s just amazingly powerful. It’s a long movie, but it’s powerful as hell and I don’t know anybody who hasn’t watched it and wasn’t moved by it. If you’re a sap like me, it’ll really move you.

Gosh! Probably just back there behind the counter with [volunteer] Natalie and [Box Office Manager] Martin. Just talking, hanging out, moving popcorn, you know, just having a good time!

As far as coming here to see movies, I still have a super fond memory of coming to see Soviet September and watching The Cranes are Flying. It was an anti-war Soviet movie – a lot of the American movies you see from that time are very pro-war, because of course they are – but this was an anti-war movie and to see an anti-war movie from that era was just really powerful for me. It was good, and I have a fond memory of being here and watching that. We were also just coming out of the pandemic but I hadn’t seen a movie or been to a movie theater in three years at that point, which is weird because I’m a movie person, but to be able to come here and see that was just meaningful.

Oh, Pedicab Driver, drop of a hat! I can’t even tell you, no film scholar is gonna pick it as a classic, but as far as personal meaning in my life, it’s just too big.