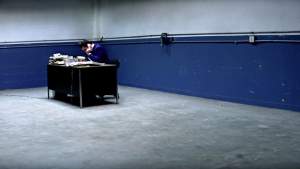 A man sits at a lone desk inexplicably positioned at the corner of an industrial space, the blue of his suit nearly blending into the blue stripe along the wall behind him. It’s quite a melancholy scene, like that of a muted Edward Hopper painting. He’s on the phone with a customer service agent, looking to clarify a discrepancy in the policy regarding a frequent flyers promotion on Healthy Choice pudding. A guy with too much time on his hands, it seems. A car comes crashing down the road outside like a pebble skipped across a pond. A van skirts up to the middle of the street and unloads a little piano before abruptly taking off. After a few apprehensive peeks, the lone man rushes towards the piano to take it inside, as if to avoid persecution.

It’s into this hushed cold open that director Paul Thomas Anderson unfolds his most unassuming film. In the comedown from his sprawling, three-hour long 1999 epic Magnolia, Anderson was intent on a scaled down feature, more approachable to its audience for the next project. If the heart pouring of Magnolia emerged out of PTA processing his father’s death and his Gen-X art-kid twenty-something power coupling with singer Fiona Apple, his next film would be a neat and tidy 95 minutes. It was inspired by the comfort entertainment of Fred Astaire and Ginger Rogers’ wartime-era films, and the burgeoning romance of a relationship to his eventual life partner. 2002’s Punch-Drunk Love is PTA’s rendition of a boy meets girl love story at its most guileless and manic. 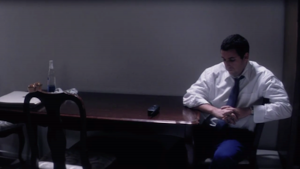 “I don’t know if there is anything wrong because I don’t know how other people are,” he confides to his dentist brother-in-law. A doctor, but the wrong kind. Barry can hardly come to terms with what he is: lonely, often pathetic, and dealing in falsehoods to dodge the brutal verbal slights from his seven overbearing and dismissive sisters. Barry Egan is a clever deconstruction of Sandler’s usual man-child comedic persona: a bare ego.

Anderson went on to add, “I loved the movies he was making at that time. Happy Gilmore, Billy Madison, and Big Daddy. When he would flip out, it appeared to me to be a guy who was really flipping out.”

For me, Anderson’s assessment rang true. I had never seen such a thrilling, authentic depiction of boyhood anger as Barry’s episodes of impotent rage. His pressure cooker eruptions are appropriate in marking stretches of nervous, jittery energy caused by a lifetime under the thumb of his unrelenting sisters. That the plungers he trades in are novelty items with shatterable glass handles is fitting. Barry’s tensions are unresolved. He is emotionally constipated. Jon Brion’s pulsating score effectively conveys the Inside Out neuroticism of Barry’s inner hemisphere.

There are, however, signs of momentum in his development. He is at least partially functional as a business owner with a number of employees under him, including the loyal and charming Lance (played by Luis Guzman). The Barry we’re introduced to dons a blue suit throughout the entire film, a sort of uniform (and nod to Anderson’s proclivity for dressing up more in his early thirties); hinting at intentionality with how he carries himself. His pudding inventory for promotional flyer miles, too, is an instinct for a vague grasp towards selfhood. There’s a winning industriousness here for the otherwise timid Barry, as he’s paid enough attention to the details to exploit a gap in the fine print. A win for sensitivity and having little else going on. He’s a man with nowhere to be, stockpiling miles for a special trip to Somewhere, Someday, just on a hunch. Holding love to give. This optimism I find endearing and relatable, even. A Healthy Choice, indeed.

The equally peculiar Lena, with her Technicolor red dress and large, non-judging blue eyes, comes into his life as jarringly as the little piano dropped off in front of his warehouse. Her mysterious presence coincides with Barry grappling with the device itself. Operating it involves reaching into its lower compartment, with its analog push-pull handle, to facilitate noise in conjunction with pressing upon the keys on top. There is no sound when pressing on keys alone. Attending to both is a lumbering yet graceful act. It emits a childlike sound, like that of a toy piano. It’s a poetic as above, so below play on Barry tapping into his inner world to express himself outwardly. Of course, it’s Lena who points out that the piano is, in fact, called a harmonium. A name to a promising, rudimentary mode of expression. A man is given definition.

And it’s across the film’s palette of red-blue-green over sterile tones, analogous to the emotionally confining world Barry occupies, that Jeremy Blake’s visuals briefly flash across the screen as story bookmarks, vibrant and soothing. They are Bewitched and Tom and Jerry and Johnny Carson’s curtains. A latent nostalgia for a more innocent era emerges through richer hues and patterns. Barry’s blue notes come to life.

Screwing up the basics, fibbing as a survival mechanism, cripplingly afraid of being found out. Barry Egan is an everyman of our innermost neuroses. His triumph in finding love and confidence is a genuine feel-good tale that reaches deep like no other. I had never seen such an empathetic rendering of social anxiety onscreen before watching Punch-Drunk Love, with all its discrete ailments and victories. Nor had I seen such an oppressive and universal sibling dynamic, or an unabashed portrayal of the intoxicating power of love itself. The film is an oddity in PTA’s canon of 90s Robert Altman Jr. wunderkind-director films and the more sweeping 2000s American character films. 2002’s Punch-Drunk Love is an utterly tender ode to the sensations of feeling too weird and broken to be loved. There is not a single line of dialogue, an actor’s mannerism, a note of music or streak of color that is out of place in its gracefully composed hour and a half. Every time I watch it, I delight in every one of Paul Thomas Anderson’s sensitive and knowing turns of cinematic phrase.

The train siren. The blood dripping over Lena’s right eye. “It really looks like Hawaii here.” The fluorescent lighting in the grocery store. “Did you just say chat?” Barry’s self-hating mumbles after leaving Lena’s apartment. And who could forget, “I have a love in my life. It makes me stronger than anything you can imagine”? 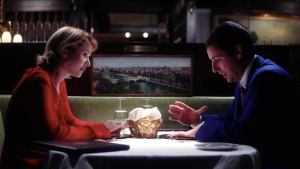