The Painter and the Thief

Winner of the World Cinema Documentary Special Jury Award for Creative Storytelling at the 2020 Sundance Film Festival, NEON presents The Painter and the Thief! 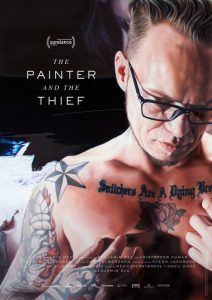 When two paintings by Czech naturalist Barbora Kysilkova are stolen from an Oslo art gallery, Norwegian authorities quickly identify and arrest the two thieves but find no trace of the paintings. Hoping to learn what happened, Barbora approaches one of the thieves, Karl-Bertil Nordland, at his criminal hearing. She asks if she can paint his portrait and, contrite, he agrees. What follows—over a series of portraits and many years—is an extraordinary story of human connection and friendship.

Using a structure that cleverly shifts perspectives, Norwegian filmmaker Benjamin Ree unfolds the fraught lives and vulnerabilities of two souls who come to recognize themselves in the other—the darkness, wounds, compulsions, and self-destructive behavior. Ree captures the revelatory moment when Bertil, a junkie and petty crook who has done jail time, first sees his portrait and breaks down completely. Throughout the film, our understanding of both people—and even the stolen paintings—changes entirely. In life, certain aspects of human nature defy comprehension, and yet Ree materializes them in a way that is accessible and transcendent.

Link to purchase tickets to stream this film in our Virtual Cinema will be available from Friday, May 22nd (Thursday at Midnight) until Thursday, June 4th. To purchase and stream, click the button below!

A portion of every ticket purchased goes directly towards supporting Orange County’s only nonprofit Art-house theater. Tickets for The Painter and the Thief are $3.99!

“[A] nuanced and beguiling new documentary about the various things we all take from each other.” — David Ehrlich, IndieWire

“An engrossing Norwegian documentary born of the unlikely but resilient bond between a young female artist and a career criminal who stole two of her large canvases.” — Todd McCarthy, Hollywood Reporter