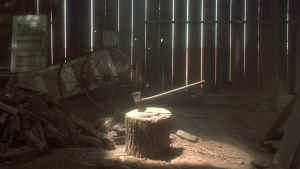 “Perhaps only a first-time director, an actor who does not depend on directing for his next job, would have had the nerve to make this movie. It is uncompromised. It follows its logic right down into hell.” — from Roger Ebert’s 4-star review of Frailty (2001), screening at The Frida Cinema July 8-9.

The great comedian Carol Liefer used to share how she maintained her personal space when flying:
[Random Airline Passenger]: “Is someone sitting here?”
[Carol]: “Nope. No one. Except… The Lord.”

In a story the adult Fenton (Matthew McConaughey) spins to FBI Agent Wesley Doyle (Powers Boothe), Dad (we never learn Dad Meiks’ first name) brought the boys life-changing news that night. An angel visited him at work and tasked him and his two sons with “destroying” demons who walk the Earth in human form—providing Dad with a list of names as well as some rather biblically revealed tools with which to divine the crimes of—then murder—people in God’s name. Younger son Adam (Jeremy Sumpter) is on board right away, while Fenton (Matthew O’Leary) suspects that Dad has lost his mind.

Revealing anything that happens after this point is a spoiler risk.

A Short Yet Solid Legacy

Frailty was Paxton’s debut as a feature film director. His untimely death in 2017 left movie fans wondering what other marvelous films he could have made. It’s hard to think of many directors who managed to establish a rock-solid body of work with a single film… But then Frailty is that sort of film.

Brent Hanley’s screenplay topped Minority Report, The Ring, and Signs to win the 2002 Bram Stoker Award. It could have easily, in the wrong hands, been rendered a campy and unintentionally comical mess. Paxton wisely decided to handle the uncomfortable subject matter–two children forced to participate in murder–with absolute sincerity; Dad could have gone as over-the-top as Jack Torrance in The Shining, but Johnny’s not coming to Thurman, Texas. Instead, Paxton portrayed him as a hard-working, responsible parent. He just happens to be abducting and murdering people in the service of God. Dad’s integrity regarding the family’s new line of “work” is such that he has to sit Adam down for a morality chat after Adam claims God told him to add a school bully to their demon list.

It is this sincerity the script absolutely requires for Frailty to work on any level. The gruesome ax-murder violence occurs mostly offscreen, the emphasis instead placed upon the profound and lasting psychological effects these events leave on the young boys.

Frailty makes little effort to conceal its influences. Hints of Alfred Hitchcock’s Psycho and Charles Laughton’s The Night of the Hunter abound. Paxton went so far as to eschew modern special effects like CGI in favor of the “old-school” techniques of those earlier directors. The modest post-Columbine, post-9/11 budget a too-spooked-to-take-risks Hollywood granted the production of Frailty gave Paxton and veteran cinematographer Bill Butler (The Conversation, Jaws) a mandate: to come up with inexpensive, convincing methods of portraying, for instance, an angelic visitation, Dad’s visions of his victim’s crimes when he lays hands on them, or even the cuts back to the interior of Agent Doyle’s car where adult Fenton tells his story on a rainy Texas night.

When The Frida Cinema staff asked me to pick a film for July, I immediately suggested Frailty because it is a superb film and because it is often overlooked despite its critical praise… but mostly because it is totally creepy in a way most horror/mystery/thrillers totally miss in the 21st century. It gets under the skin, upends reality, and leaves its audience with much to discuss… over the stiff drinks they might require after seeing it.

Frailty will be screening at The Frida Cinema July 8-9.

“Electrifying. A tale of madness and elemental evil which keeps you guessing until the very last shot.” — James Cameron

“Frailty is the most frightening horror picture I’ve seen since The Shining. It kept me on the edge of my seat begging for mercy.” — Sam Raimi

What a hidden gem! I had such a lovely time at a recent showing of Godzilla (1954). This theater is a bit timeworn, yet undeniably quaint and charming with an unconventional feel. And interestingly enough, the audience served as the sweet element of surprise. Those in attendance created an atmosphere of delight, comfort, and personal acceptance… and get this.. there was an actual host who presented a brief preface to the film just prior to viewing. Very collegiate, which I loved!  All in all pe… END_OF_DOCUMENT_TOKEN_TO_BE_REPLACED